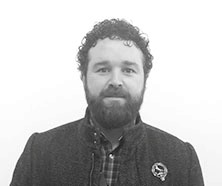 Dr. Dean McDonnell is an Assistant Lecturer of Psychology within the Department of Humanities; specifically working on the Abnormal, Cognitive, and Social Psychology modules, in addition to supervising final year projects.

Prior to his appointment at SETU Carlow, Dr. McDonnell was an Associate Lecturer of Cyberpsychology in the Institute of Art, Design, and Technology (Dun Laoghaire), and in Educational and Developmental Psychology in Marino Institute of Education. He is heavily engaged in research and completed a two-year Postdoctoral Post in Dublin City University where he utilised eye-tracking and multimedia analysis tools to explore executive function in multimedia contexts. Alongside his academic work, Dr. McDonnell is a member of the British Psychological Society (BPS), European Federation of Psychology Student Associations (EFPSA), and the Psychological Society of Ireland (PSI). Since 2013, Dr McDonnell has been working within the PSI, and was recently elected as a full member of the PSI Council (2019-2023).

McDonnell, D.P., Flood, C. & Rooney, B. (2013). Attitudes to artificial intelligence based support for psychotherapy: a survey of psychotherapists in Ireland. In A. Power and G. Kirwin (Eds.) Cyberpsychology and New Media: A Thematic Reader. Psychology Press.

McDonnell, D. (2015). A Day in the Life: Psychologist within Education. Psychological Society of Ireland, Grantham House.

McDonnell, D. (2012). Attitudes to Artificial Intelligence based Support for Psychotherapy. Annual Conference of the Psychological Society of Ireland

Areas of Interest for future supervision