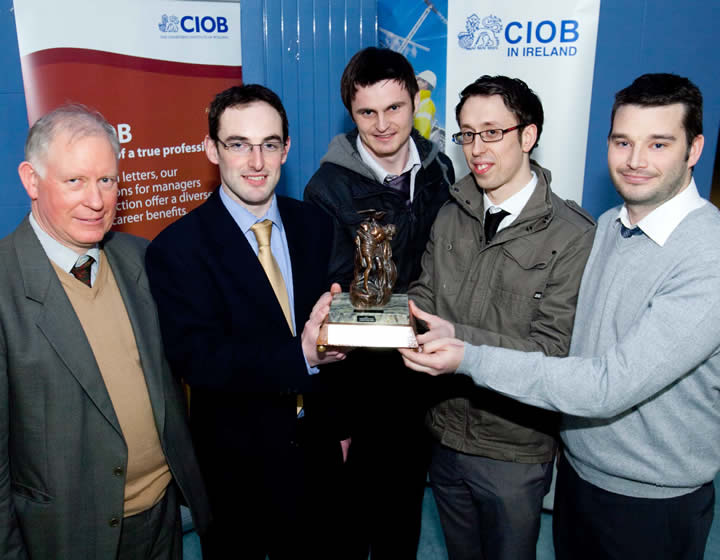 Congratulations to the Built Environment students from the BSC in Buildings & Services Management, BSc in Facilities & Energy Management and BSc (Hons) in Quantity Surveying who won the Irish Chartered Institute of Building (CIOB) Student Challenge.

The IT Carlow students returned to Carlow with a perpetual trophy and €400 in prize money and a place in the International CIOB Student Challenge to be held in England in March.

Martin O’Neill, Built Environment Lecturer, IT Carlow said, “The staff and students of the Department of the Built Environment are very proud of this achievement by our winning team in remaining cool, calm and collected whilst working effectively as a team under pressure to present a winning solution to an involved construction problem.  The experience will be a valuable addition to their CVs when seeking employment next year and success in excelling at these levels is a great reflection of the quality of Built Environment courses in IT Carlow.”

The challenge required the teams from 9 Irish third level colleges to prepare a report and presentation on project management proposals for the refurbishment and upgrading of a period house in Limerick.  Time was of the essence as the teams only had 4 hours to prepare the report and a further 1 hour to put together a presentation, which then had to be presented to a panel of judges.

The IT Carlow team delivered a very slick presentation and professional report which won the day.  There was then a nail biting conclusion to the event whilst we waited for the judges to decide whether IT Carlow or Letterkenny IT who won the heats in the northern half of the country should represent Ireland in the international CIOB Student Challenge in the UK in March.

Edwin Landzaad, Head of Department of  Built Environment, IT Carlow said, “CONGRATULATIONS to all the students and staff involved in this, another prestigious win for the Programmes, Department and Institute as a whole.  We wish the winning team all the best in going forward to the International CIOB Student Challenge in England next month.”