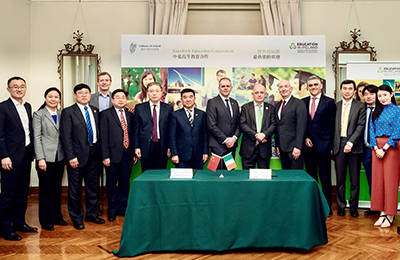 Institute of Technology Carlow has become the first Irish institute of technology to receive approval from the Chinese Ministry of Education to establish a joint institute in China.

Carlow International College of Technology, located in the city of Zhengzhou in Henan province, has been approved for an annual intake of 280 students and a total learner population of 1,120 from September 2022. The new college will initially deliver three degree programmes: a BSc (Honours) in Brewing and Distilling; a BSc (Honours) in Sustainable Farm Management and Agribusiness and a BSc (Honours) in Software Development.

Carlow International College of Technology will run in partnership with Henan University of Animal Husbandry and Economy (HUAHE). Its establishment, with the backing of the Chinese Ministry of Education, is the first ever endorsement given by the Chinese government to an Irish institute of technology; currently, only UCD and NUI Maynooth have a similar approval.

Ambassador of Ireland to the People’s Republic of China, Dr. Ann Derwin congratulated Institute of Technology Carlow on its achievement. Ambassador Derwin commented, “On behalf of Team Ireland in China, and as the ambassador of Ireland to China, sincere congratulations to IT Carlow for being the first Irish Institute of Technology to receive approval from the Ministry of Education for a joint institute in China. It is a great achievement and many congratulations.”

“Carlow International College of Technology, in partnership with Henan University of Animal Husbandry and Economy, will further contribute to the educational and research exchanges between Ireland and China in the areas of food, farming and computing.  I look forward to the launch of this partnership and be assured of the continuous support of Team Ireland in China”, continued Ambassador Derwin.

Henan province, home to Carlow International College of Technology, is China’s most populous province with over 112million residents, where IT Carlow has been working with university partners for almost 20 years.

Carlow International College of Technology is the culmination of a three-year due diligence process that saw a series of site visits by senior academics between HUAHE and IT Carlow.  The application process including meetings with a validation panel nominated by the Chinese ministry prior to application approval.

IT Carlow Vice-President for Development and Research Declan Doyle and Donal McAlister, International Affairs Manager, led the application process. Mr Doyle commented, “This is a hugely important development in international relations for Institute of Technology Carlow. We have been working in China since 1995, during which time more than 1,000 Chinese students have graduated from the institute across all of our faculties. The cooperation and advice received from the Embassy of Ireland in China and from Education in Ireland was critical to the success of this application.”

President of HUAHE  Shixi Luo commented, “The establishment of Carlow International College of Technology will bring closer cooperation between IT Carlow and HUAHE in the field of talent training, thus leading to further exchanges in science, technology and culture. Through the integration of educational philosophy and resources, the internationalisation level of the two institutions will be promoted and the domestic and international influence of the two institutions will be enhanced. This cooperation will bring a new level of cooperation in higher education between China and Ireland and inject new momentum for economic and trade cooperation between the two countries”.

Former Irish ambassador to China, Mr Eoin O Leary, travelled to Zhengzhou on two occasions to accompany the IT Carlow team to high-level meetings with the provincial ministry.

In a separate initiative, IT Carlow is currently collaborating with another Chinese education partner regarding the Bachelor of Arts (Honours) Visual Communications and Design taught at its Wexford Campus School of Art and Design (WCSAD). Some 200 students are enrolled at this course in North East China, while approval is also pending from the National Accreditation Board in Ghana of a collaboration with the institute’s Department of Computing.

By the academic year 2025/26, Institute of Technology Carlow will have 2,000 learners based overseas making it the largest Irish provider of transnational education programmes.