Former IT Carlow student wins Press Photographer of the Year 2021 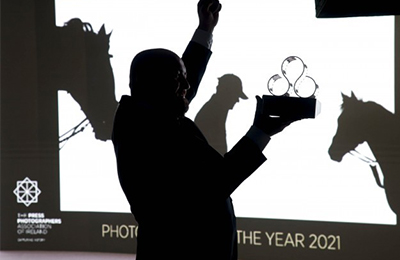 James, from Tullamore and who studied computing at IT Carlow, works as a sports photographer with Inpho Photography. His portfolio was cited by the judges as, “a marriage of superb features work, creative portrait work and solid sports photography”.

James received two category awards – first prize in sports action for his image ‘Foggy Semi-Final’ as fog descended during the All-Ireland Senior Football Championship Semi-Final between Mayo and Tipperary, and second prize in sports non-action for his iconic image ‘He is Risen’ (pictured), taken as a fan watches St Brigid’s play Boyle in the Roscommon GAA Senior Football Championship Semi-Final over a graveyard wall. 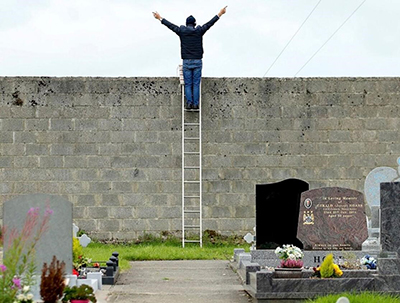 David Denieffe, Vice-President for Academic Affairs, IT Carlow commented, “We are admirers of James’s fantastic work and delighted he has received such a prestigious and well-deserved award of Press Photographer of the Year. In particular, Foggy Semi Final, which took first prize is a defining image of the last sports year. Congratulations James from everyone at IT Carlow”.

In their citation, the judges further commented about James, “Here is the work of a creative and observant photographer who approached every assignment with great energy to create unique, captivating images which go way beyond ‘just’ a well taken photograph. We really got the impression that this photographer worked incredibly hard to raise their game and push the range of their work during this most difficult Covid year.”

Mr Rodwell said: “Many congratulations to our colleague James Crombie on being named the ‘Press Photographer of the Year’ 2021 with his tremendous portfolio of images. Tonight’s awards have been very different to how they are usually marked, but we are delighted to share the awards with such a wide audience online.

“I would also like to thank everyone who took part in the ceremony and really brought it alive. It has been an extraordinary last 12 months in the country’s history, during which the members of the PPAI have served their vital role in producing a visual record of the pandemic, which will be preserved in the nation’s archives.”

Caption: IT Carlow former student James Crombie pictured after winning Press Photographer of the Year 2021by the Press Photographers Association of Ireland. In the background is one of his winning images. Pic: Paul Sherwood