IT Carlow female students making an impact as we mark IWD 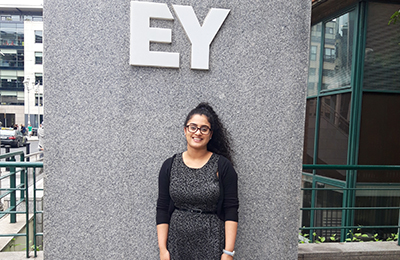 As we prepare to mark International Women’s Day (IWD) next week (8th March), one student and one recent graduate of Institute of Technology Carlow have been making their mark in the corporate sector and reflecting this year’s IWD2021 theme, #ChooseToChallenge.

Surbhi Mohan, who graduated with a first-class Bachelor of Arts (Honours) in Accounting last November, has been nominated by her new employer EY (Ernst and Young) for an International Women’s Day award in the category Rising Star.

Multinational EY is one of the largest professional services networks in the world. Each year it recruits a large number of graduates from the hundreds of hopefuls aspiring to work there. Surbhi started work at EY in November 2020 as an assurance associate in structured finance (part of Banking and Capital markets) within the audit department.

In a short time, she has made an impact. Surbhi is an active member of the EY international network steering committee, having gained valuable experience at IT Carlow’s Students Union where she was part-time international officer and a member of the finance committee. She was thrilled with her nomination by EY as Rising Star in advance of International Women’s Day.

Commenting on her nomination, Surbhi said, “I am honoured to have been nominated for an International Women’s Day award in the category of Rising Star.”

Another story of resilience is a student who will be graduating this year, Theodora Tataru, who knows all about challenges. Theodora has successfully beaten cancer and used the pandemic challenge as an opportunity to create a successful application that has caught the eye of Microsoft.

Having moved to Ireland from Romania in 2014, Theodora was diagnosed with stage 2 skin cancer and underwent treatment. “On my first day at IT Carlow in 2017, I was cancer free”, she commented.

While studying for her BSc in Software Development, Theodora volunteered as a mentor at Coder Dojo by teaching basic programming to children from five to 17 years on the IT Carlow campus.

Theodora found the pandemic challenging in applying for jobs and a number of placements offered to her were rescinded. Undeterred, she concentrated on building an application for students to track their academic progress. The app caught the attention of Microsoft and Theodora was invited to numerous Microsoft live shows to tell her story. Today, the application is used by over 500 students in Europe and is available on Android and iOS.

Theodora hopes to graduate this year with a first class honours Bachelor of Science in Software Development. Last year, she was awarded Ambassador of Women by IT Carlow’s Tech Society.

“I was a member of the ITC Tech Society from the first day I joined college. On International Women’s Day, I would like to encourage all the girls and women out there to pursue their dreams and to remember this quote ‘The woman you are today didn’t happen overnight. Be proud of her!’, “she commented.

Well done to both Surbhi and Theodora who are just two of the many graduate and undergraduate success stories from Institute of Technology Carlow.

Caption: Pictured is Surbhi Mohan at EY, where she now works