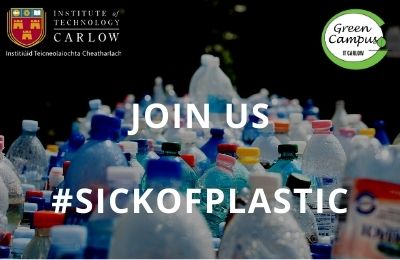 The IT Carlow Green Campus committee has announced local details of the inaugural Sick of Plastic national online campaign that kicks off today and runs until 26 February.

Sick of Plastic aims to engage with IT Carlow students and staff, as well as the wider community, to identify how we can reduce plastic in our lives. It is part of a national campaign of the same name organised by VOICE (Voice of Irish Concern for the Environment) Ireland and Friends of the Earth.

Every day the Sick of Plastic campaign will present and showcase a different theme such as waste awareness, sustainable practices and information about which local businesses contribute to green living. Participants are encouraged to share their tips on reducing plastic and identify retailers that are doing their bit for the environment.

“This is a fun campaign with a serious message”, commented IT Carlow Green Campus Chairperson, Bernadette Power.  “Every year, Irish landfills are filled with around one million tonnes of packaging waste, according to Environmental Protection Agency Ireland, and this campaign is an opportunity to share some great ideas about how we can reduce plastic”.

Klaudia Tarnowska, the IT Carlow Green Campus campaign co-ordinator, said she is delighted to bring the national Sick of Plastic campaign to the attention of the IT Carlow community.

“The Sick of Plastic campaign was launched in 2018 by VOICE (www.voiceireland.org) and Friends of the Earth (www.foe.ie) to push for ambitious legislation and changes in supermarket business practices to reduce plastic pollution”, commented Klaudia, “It’s really exciting to have our college community contributing to the Sick of Plastic initiative. It is a serious eye opener to realise the true scale of the plastic problem”.

Everyone who participates in the campaign will be entered into a competition to win some great non-plastic prizes sponsored by the Sick of Plastic Ireland nationwide campaign and the IT Carlow campaign co-ordinators.