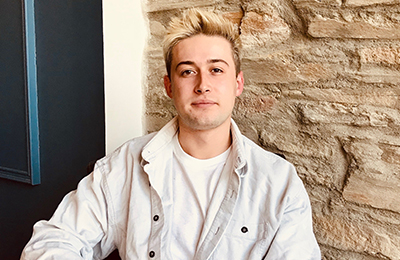 Four final year students from the BSc (Honours) in Brewing and Distilling course at Institute of Technology Carlow have been selected to work with Carlow's newest whiskey company, Flying Tumbler, on an innovative upcoming project.

Kira Kamateras from Bunclody, Ben Hodgins from Clonakility, Paul McNamara from Abbeyleix and Anthony Gannon from Tullamore, alongside their course lecturer Dr. Blaise Nic Phiarais, are collaborating with the Flying Tumbler team on a project that will give the students direct hands-on experience in the core areas of gauging, blending and bottling Irish whiskey. The brewing and distilling programme at IT Carlow was the first of its kind in Ireland when initiated in 2017.

The students will assist Flying Tumbler founders Patrick and Thomas Walsh on the process of gauging their existing casked stock for volume in addition to undertaking ABV, clarity and colour tests on the liquid. Following this, the students will work closely with the founders to blend their next expressions. This is a complex and highly technical process that involves disgorging liquid from casks into a series of tanks and blending vessels, filtration and eventual dilution of the whiskey to the desired ABV. In the final element of the project, the students will assist with a full bottling run on Flying Tumblers’ blended whiskey.

Commenting on the project, Flying Tumbler co-founder Patrick Walsh said, “This is a really exciting project for a new local business like Flying Tumbler. Not alone are we able to work closely with a great local business in Carlow Brewing Co, we are now able to collaborate with some of the final year IT Carlow BSc Brewing and Distilling students, who are passionate about this industry, and give them invaluable real-world experience to take into their careers within the brewing and distilling sector”.

Dr. Blaise Nic Phiarais, a lecturer in the BSc in Brewing and Distilling at IT Carlow, said, ‘This is an exciting opportunity for our students and the institute thanks Flying Tumbler for collaborating with us. To experience this aspect of the production process will be of huge benefit to our students in their careers.

The project will see Flying Tumbler blend two expressions. The first, a development of its first product The Bird, will be a blend of triple distilled grain and malt whiskies married together in oloroso sherry oak casks for over 12 months and then blended with triple distilled single grain and single malt whiskies matured in ex bourbon oak casks.  The second bottling from a single cask - The Tippler -  will be a 12-year-old blend of grain and malt whiskies from two separate Irish distilleries initially aged independently in bourbon casks and then married into an oloroso sherry seasoned ex Californian 225L oak cask for over 12 months. Both products will be disgorged, filtered and cut to drinking ABV onsite at Carlow Brewing Company by Flying Tumbler and the IT Carlow brewing and distilling students.

Launched in 2017, the four-year Bachelor of Science (Hons) in Brewing and Distilling was developed by Institute of Technology Carlow following significant research and consultation with industry, representative organisations, national bodies and government. The programme has received huge support from industry that has consistently reported difficulties in recruiting suitable qualified staff.  The programme is one of only four in the world to achieve professional recognition by the prestigious Institute of Brewing and Distilling (IBD), the world’s leading professional body for the brewing and distilling industry.  Graduates of the degree are eligible to sit the master’s level professional qualifications of the IBD and hugely in demand within the industry at home and abroad.

Pictured: IT Carlow brewing and distilling undergraduate Ben Hodgins from Clonakilty who has been selected to work with Carlow’s newest whiskey company, Flying Tumbler