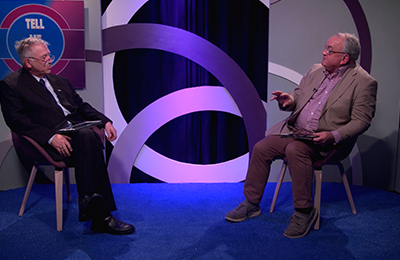 The first of a three-part online series filmed and produced at Institute of Technology Carlow’s media studios aired last Thursday to critical acclaim.

Tell Me About, described as “a pandemic rural health and wellness symposia series”, is a collaboration between IT Carlow, Teagasc, the School of Nursing and Midwifery at Trinity College Dublin, and Letterkenny IT. The series was produced by IT Carlow lecturer Brendan Connolly at the institute’s media studios during the lockdown earlier this year.

Professor Paul Horan, who is chair of the civic engagement committee at the School of Nursing and Midwifery, Trinity College Dublin described the series as “a phenomenal collaborative ground breaking project which aimed to communicate virtually with the rural community in Ireland about health & wellness in a way that overcomes the social public health restrictions of a global pandemic”.

Tell Me About includes contributions from academics and researchers from IT Carlow, Teagasc, Trinity College Dublin, and NUI Galway, as well as healthcare professionals and representatives from a wide range of institutions and services across rural Ireland. Amongst the contributors are:  Minister of State with special responsibility for Research and Development, Farm Safety and New Market Development Martin Heydon, TD; president of the National Ploughing Association, Anna May Mc Hugh;  former GAA president Nickey Brennan; journalist and broadcaster Billy Keane; Catherine Comiskey, Professor of Health Modelling and Statistics at Trinity College Dublin. The series mirrors the notion of being Trom agus Eadrom (Heavy and & Light) and attempts to create a mix of scientific research, narrative contributor interviews as well as musical and poetic moments.

The first programme, entitled Living with Well with Covid 19, was broadcast on the Teagasc YouTube Channel last Thursday (12th November 2020) at 8pm. The second programme in the series, to be released on 19th November, will focus on men’s health and wellbeing. The final programme, on 26 November, will focus on self-care and wellness in rural Ireland. All programmes will be broadcast through the Teagasc YouTube Channel initially and thereafter have a permanent online presence.

You can watch the video online here »

Caption: Pictured are Professor Gerry Boyle, National Director of TEAGASC and former GAA president Nickey Brennan who both feature in Tell Me About.