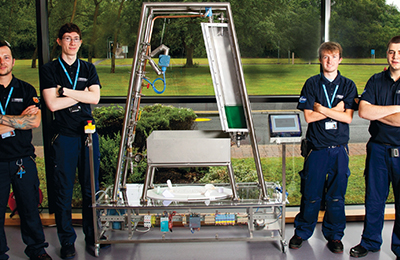 Institute of Technology Carlow has extended congratulation to the Pfizer Newbridge apprentice team that attends IT Carlow after it won the National Craft Apprenticeship in the prestigious Generation Apprenticeship 2020 competition. The announcement was made by Minister for Further and Higher Education, Research, Innovation and Science Simon Harris TD.

Speaking as he announced the winners Minister for Higher Education and Research Simon Harris TD said, “We have seen so many people enter this competition from many different backgrounds and I want to thank everybody who took part, all of you pursing the career that you want, reaching your ambition and fulfilling your potential. At a time of huge uncertainty for our country, of great worry for many people, you have shown serious motivation and that is inspiring to each and every one of us”.

Now in its third year, the Generation Apprenticeship competition celebrates the best teamwork, leadership, creativity and problem-solving skills of Ireland’s apprentices. The competition has two categories to showcase skills across the full spectrum of apprenticeship programmes.

Commenting on the win, Dr. Frances Hardiman, Head of the Faculty of Engineering at Institute of Technology Carlow said, “This competition, and apprenticeships in general, demonstrates the critical relationship education has with industry in the development of future talent. IT Carlow is proud to be the national provider of both the electrical instrumentation and instrumentation apprenticeships, essential to the development of apprentices with companies such as Pfizer”.

Caption: Pictured are the winning team with their A frame design.