IT Carlow Graduates Line Out For Ireland 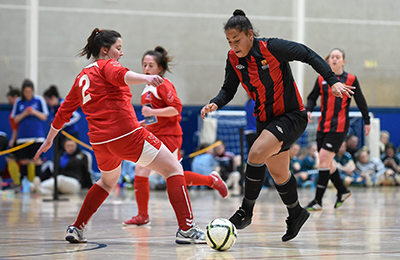 Four IT Carlow former students are currently in camp preparing for Saturday’s UEFA Women’s Euro 2022 qualifier away to Germany.

Rianna Jarrett, Claire O’Riordan, Aine O’Gorman and Louise Quinn are part of the Republic of Ireland women’s national team whose squad members all have one thing in common: education.

All of the team have attended higher education institutes while progressing their careers in football, with ten of those players studying at third-level in Ireland. And for IT Carlow former students Rianna, Claire, Aine and Louise, the institute’s links with the Football Association of Ireland in offering courses that merge business and sport has allowed the players to train and perform at the highest level in their field while pursuing a third-level education.

All four players pursued the BA Sport Coaching and Business Management (CW827) at IT Carlow. After studying at IT Carlow, Aine O’Gorman moved to Doncaster Rovers and is now with Peamount United Women’s National League. Louise Quinn moved to play professional football in Sweden after studying at IT Carlow and is now with Fiorentina (Italy). Claire O’Riordan currently plays with MSV Duisburg (Germany) and Rianna Jarrett is with Rianna Jarrett Brighton & Hove Albion English FA WSL

"The BA Sports Coaching and Business Management course has allowed a number of the current Irish Senior Women’s’ National Team to successfully combine their academic studies with their development as a player. It has been fantastic to follow the girls’ progress since leaving IT Carlow and establish brilliant careers, with both their club and international careers", commented Luke Hardy, FAI Programme Leader at Institute of Technology Carlow.

Rianna, Claire, Aine and Louise competed in the CUFL Women’s, WSCAI Intervarsities and Futsal as IT Carlow students and went on represent Ireland at the World University Games.

Ireland take on Germany in the UEFA 2022 Women’s European Championship Qualifying – Group I at Stadion Essen at 13.00 Irish Time. The entire staff and students at IT Carlow wish Rianna, Claire, Aine and Louise and the rest of the team our best wishes.