IT Carlow students lead in Design and Artificial Intelligence 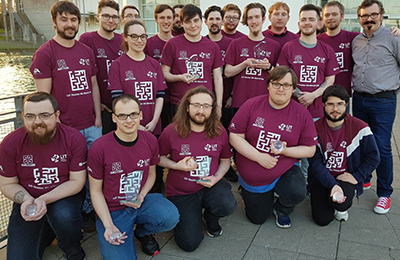 The first award went to Games Development student Eoin Galavan, who built a robot which defeated teams from colleges and universities across the country.

The robot tracked the positions of bots in a virtual arena, avoiding Sentry AI bots, and attacking and defeating competitors in over 20 matches. During the final, Eoin Galavan’s AI robot was always in the lead with a score of 7 match wins against DkIT’s 2.

Best Game Award went to the IT Carlow team that created SWARM, a game that simulates a virus, employing Artificial Intelligence to defeat video game players. The virus images, inspired by global pandemic fears, were created by Visual Communications students from IT Carlow's Wexford campus. Much like a pandemic, the virus multiplied and mutated and could only be defeated by players working cooperatively.

Institute of Technology Carlow also received awards for User Experience and User Interface design, and an Innovation Award for the engaging game Build a Maze. The game was a hit with judges and visitors to the event and the team now plans to release the title to mobiles.

The games will be on display, alongside others, at the Institute’s celebration of Design Technology at the Industry Showcase, taking place in Institute of Technology Carlow on Thursday 23rd April. For more information contact showcase@itcarlow.ie or phone 059 9175500.