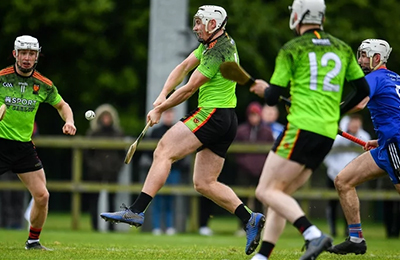 Congratulations to Institute of Technology Carlow Senior Hurlers who put in a fantastic second half performance in tough conditions at DCU on Saturday afternoon to beat Mary Immaculate College Limerick 5-14 to 0-15. IT Carlow is now through to its second-ever Fitzgibbon Cup final and will face off against current holders UCC on Wednesday next at 7.30pm in DCU.

It was a thrilling match. A powerful, diagonal wind played havoc with the action early on and it took some time for the teams to come to grips with it.

The free-taking of Cathal Bourke looked to have put the Limerick side in control in the first-half, but Cathal Dunbar’s 23rd minute goal turned the game in favour of DJ Carey’s side, while Dunbar and Chris Nolan skewed the winning margin in added-time with their side’s fourth and fifth goals.

Second-half goals from Stephen Bergin and Liam Blanchfield in the space of a minute secured IT Carlow's place in Wednesday’s Fitzgibbon Cup final with a convincing victory.

Head of Sport Donal McNally and team would like to thank everyone for supporting the team, including sending messages, tweets, and shared posts as well as attending the matches in person.

The Institute is organising buses for staff members, students or families wishing to travel to Wednesday’s final. Anyone wishing to avail of the bus should call to the sports office before 12noon on Tuesday. Places may be limited so early booking is advised.

Best wishes to all the team on Wednesday.