All Set for Fitzgibbon Cup Semi-Final 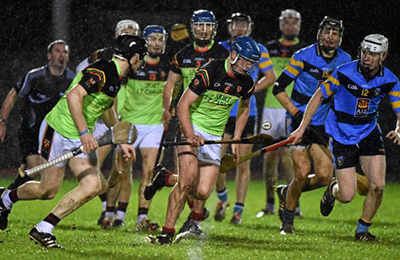 Staff and students are looking forward to an exciting showdown this Saturday between the Institute of Technology Carlow and Mary Immaculate College in the semi-final of the Electric Ireland Fitzgibbon Cup.

The game will form part of an action packed double header at DCU sportsgrounds with first game throwing in at 2pm before the hosts DCU, take on UCC, in the second game of the day at 4.30pm. All four teams will be hoping they can do enough to reach the Fitzgibbon Cup final which will take place just four days later on Wednesday the 12th of February in DCU at 7.30pm.

Mary I were the first to qualify for the final four after five unanswered points in extra-time handed them victory over UL. Reigning champions UCC were the next to book their place in the semi-finals. DCU enjoyed a six-point win over WIT to reach the semi-finals and IT Carlow made up the final four in dramatic style, defeating NUIG after extra-time in a game where they scored five goals.

Speaking this week, Donal McNally, Head of Sport at IT Carlow said, the management team and players are looking forward to travelling to DCU on Saturday next to take on Jamie Wall and his Mary Immaculate College team.

“Mary I are extremely experienced at this level and will be attempting to reach their fourth final in five years, after winning back to back Fitzgibbon Cups in 2016 and 2017. It’s been a great year so far for IT Carlow GAA clubs and we hope staff, students and supporters will continue to travel in big numbers to support the team as they go in search of a win that would guarantee the Institute’s second-ever appearance in a Fitzgibbon Cup final”, said Donal McNally.