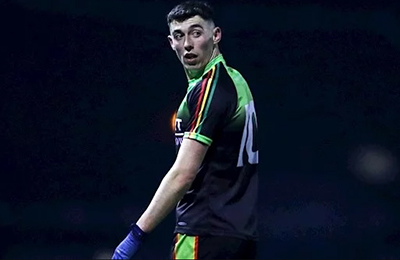 The Institute’s gaelic football squad were victorious over UCC at the weekend in an absorbing Sigerson Cup quarter-final at home, ending with a four-point winning margin. The final score was IT Carlow 3-09, UCC 0-14.

The home side went in front when the outstanding Cian Farrell pointed from play on five minutes. Kerry star Seán O’Shea levelled matters from a free on 11 minutes.

IT Carlow went on to strike a rich scoring vein midway through the half, full-forward Padraig O’Toole scoring a well-worked goal on 15 minutes. A minute later they raised a second green flag from right-half-forward Evan Lowry. Lowry quickly tacked on a point from play and, after 17 minutes, Pat Critchley’s side were 2-4 to 0-2 to the good.

UCC, featuring a number of big-name players, trimmed the arrears to five points by half time (2-5 to 0-6) and, having introduced a raft of half-time substitutes, continued to eat into the Carlow lead throughout the second half. UCC’s level of possession was sufficient to see Sean O’Shea level matters and it seemed that the Cork college might push on to victory.

But IT Carlow had other ideas. They pulled two points clear with a brace from Cian Farrell. And then, in injury-time, they launched a sweeping move which originated in their own half and Padraig O’Toole finished it off with a superb goal with the game gone into four minutes of injury-time.

A point from play from Diarmuid O’Connor was all UCC could muster as Critchley’s men booked a deserved Sigerson semi-final in a game where UCC never led.