IT Carlow Shake Off GMIT in Second Round Fitzgibbon Cup 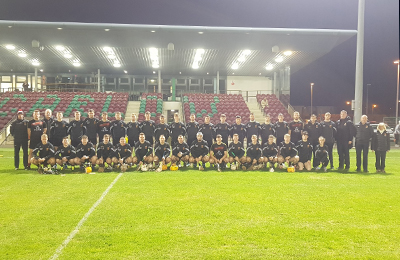 DJ Carey’s charges had to battle all the way on home ground to overcome the strong challenge of GMIT in the second round Fitzgibbon Cup tie. The final score was IT Carlow 1-16 to GMIT 1-13.

GMIT’s Ronan Murphy opened the scoring just seconds in, with a fine point out of play. However, this was the only time GMIT led as IT Carlow rattled off the next four points from goalie Enda Rowland from a trademark long-range free, Cathal Dunbar, and a brace of points from frees by left full forward Seamus Casey.

Wexford’s Cathal Dunbar was to have the biggest scoring impact on the game, the midfielder hitting a total of l-4 from play for the winners, his goal arriving on 28 minutes to put the home side 1-8 to 0-5 ahead. IT Carlow led 1-10 to 1-5 at the break.

Scores became scarce in the second half with GMIT taking the game to the home side and cutting the arrears to a single point on 54 minutes after two well-taken pointed frees from GMIT centre back Jack Forde.

But it was Enda Rowland who closed out the game for IT Carlow with two outstanding pointed frees from long range before Forde traded points with home substitute Rory Higgins to complete the scoring.