Great Start to the Decade for IT Carlow Sport 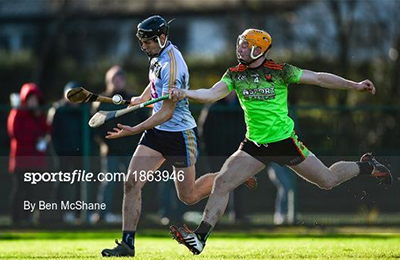 2020 is kicking off to a great start for IT Carlow’s sports teams.

The IT Carlow camogie team had a good win against a tough Garda College team on Monday night in the 2nd round of the Purcell Cup group stages to qualify for the quarter finals in two weeks’ time. Final score was 6.8 to 4.3  This follows on from the team’s win last week of the Division 2 League for the first time since 2000.

On Sunday, the Institute had two good wins in the Sigerson Cup and Fitzgibbon Cup leagues.

In the Sigerson Cup, the Institute hit three goals in the final 10 minutes to snatch victory from their IT Tralee hosts at Austin Stack Park. The 54th-minute sin-binning of Iarla Courtney proved costly as the visitors had goals from Adam Steed, Farrell and Conor Doyle deep into injury time. Final score was IT Tralee 1-13 IT Carlow 3-9.

In hurling, IT Carlow made a winning start to its Fitzgibbon Cup campaign, defeating UCD by seven points in their Group D clash at Billings Park. They trailed by three points at the interval but dominated upon the resumption, with goals in the third quarter from Cathal Dunbar and Liam Blanchfield helping to build an unassailable lead. Final score was IT CARLOW 3-20 UCD 2-16.

And on Saturday evening, the basketball team swept aside Fr. Mathew’s in the President’s Cup, denying them a shot at Tradehouse Central Ballincollig in an all-Cork decider. Final score was IT Carlow 89 Fr Mathew’s 76.

Well done to all for a great start to a new decade of IT Carlow sport!