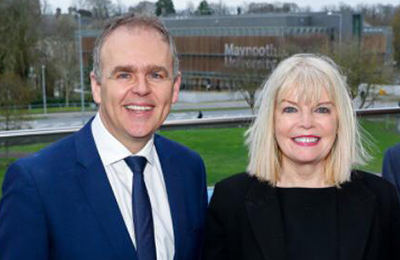 The Minister for Education and Skills Joe McHugh T.D. and the Minister of State for Higher Education Mary Mitchell O’Connor T.D today announced a €750,000 capital grant funding for Institute of Technology Carlow as part of a larger €10 million funding for the country’s 11 institutes of technology (IOT) and TU Dublin.

The investment is being made under Project Ireland 2040 for the current academic year and the money will be used on small-scale and necessary infrastructure works and improvements.

The €10 million fund is allocated on the basis of enrolments.

Minister McHugh said: “This is priority investment by the Government under Project Ireland 2040 because it helps the institutions to carry out minor works, make small but important improvements on campuses and get better equipment.

“And it also complements the heavy investment in third level facilities with €2.2 billion being spent across the sector from 2018-2027 in new buildings, better labs and learning spaces and other areas.

“IoTs can tap into this funding for refurb jobs, to upgrade IT, to make health and safety improvements and make buildings more energy efficient.”

Minister Mitchell O’Connor said: “The Government is committed to supporting quality and excellence in established and emerging technological universities.  The capital grant announced today will complement the €90 million Technological University Transformation Fund announced in Budget 2020 and gives important flexibility to the institutions in addressing their most urgent capital priorities.

“Previous rounds of this scheme have had a significant positive impact on campus development. For example, institutions have been supported to upgrade their laboratories, to replace obsolete ICT equipment, to install energy efficient lighting, and to repurpose existing spaces in line with the needs of students and staff.”

The €10 million funding will be provided to the institutions through the Higher Education Authority (HEA).

A review of the devolved grant scheme, which has operated at its current level for six years, is currently being undertaken by HEA, in consultation with the sector. This will inform future approaches to capital grants for minor works and equipment as Government investment in the sector continues with the roll-out of Project Ireland 2040.