Great Turnout for 5th ‘Showdown in the Barrow’ Boxing Tournament 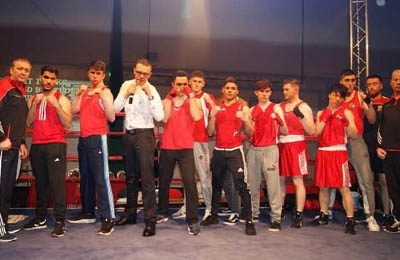 More than 250 attendees last night descended on the Barrow Centre at Institute of Technology Carlow for the fifth annual Showdown in the Barrow third-level boxing tournament.

Amateur boxers from IT Carlow, TU Dublin, WIT, DCU, Maynooth University, and boxers from local club Raging Bull participated in the event that saw 10 fights on the night while entertainment was provided by the Institute’s hip-hop, Irish Dancing and DJ societies. Up to €1,000 is expected to be raised from the event for IT Carlow boxing club.

The hugely popular initiative, which was Student Sport Ireland Event of the Year 2016/2017, has been described by DCU Boxing Coach and Irish Athletic Boxing Association (IABA) coaching tutor Derek Ahern as “by far the best all-round amateur boxing event I have witnessed.”

Showdown in the Barrow is the culmination of eight weeks of planning by the Institute’s boxing club, with assistance from the students in the Department of Science and Health, Students Union aided by the support Sports Office and Estates Department. The objective is to create an event to showcase, beginner and intermediate third level boxers in colleges across Ireland and the sell-out event features weigh-ins, 12 evenly-matched bouts, an MC, ring girls, IABA referees and judges, individualised entrance music, a match programme, trussing, lighting and smoke.