Shaved Rapunzel, Scheherazade and the Shearling Ram from Arcady 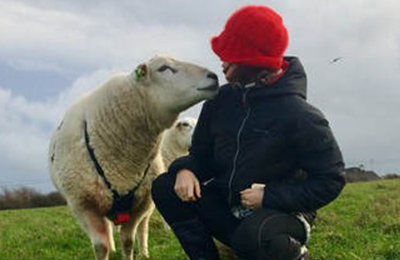 Shaved Rapunzel, Scheherazade and the Shearling Ram from Arcady follows the seasons of a sheep year in southeast Ireland, where Barry runs a flock of pedigree Lleyn sheep and recounts the personal experiences of the artist, who has left the city and returned to her pastoral roots to be reborn as a hybrid: a farmer-artist.

While embedded in the reality of this situation, the book is a fictional and humorous series of short stories that recount the artist’s tenuous and symbolic interactions with different characters and animals from her unique circumstances and reflects on the culture of disconnection from the natural environment and on the boundaries within art, gender, and the rural everyday.

The book contains the texts from two of Orla Barry’s major performance works, Breaking Rainbows (2016) and SPIN, SPIN, SCHEHERAZADE (2019) and the Meanest of the Flock, An Abcdery of Sheep by Lisa Godson. Design is by Lutece Mauger (FR).

Orla lived for 16 years in Brussels and now lives and works in South East Ireland where she runs a flock of pedigree Lleyn sheep. Her work deals with the physicality and poetics of oral language drawing on the tensions between being an artist and a farmer in rural Ireland.

Orla’s colleagues and students are delighted for her success and wish her well with the launch of Shaved Rapunzel, Scheherazade and the Shearling Ram from Arcady.