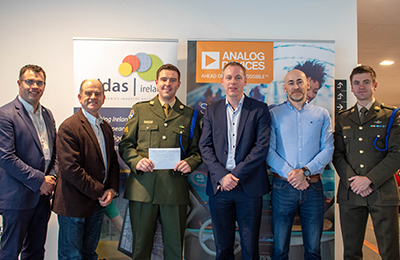 Mark was awarded €1,000 for his project Vehicle Breathalyzer & Safety Monitoring System. His supervisor was Kevin Smyth. The other winners were each awarded €250. They were: Hasan Hammad, from TU Dublin Tallaght with Design and Implementation of an IoT Medical Care System with Web Development (Supervisor – Michael Gill) and Daire Joyce from NUIG with Real-Time Detection of Intention to Execute a Sit-to-Stand Transition for Ultimate Implementation as an Implanted Electronics System (Supervisor – Gearóid Ó Laighin).

MIDAS Ireland is an industry-led cluster consisting of industry, educational, research and government agencies, working together to assist in the development of the electronics based systems sector in Ireland. MIDAS began in 1999 as the Microelectronics Industry Design Association with a focus mainly on the design of advanced integrated circuits. Today MIDAS aims to represent the entire value chain, as the industry evolves to deliver more complete electronic and software system solutions. This industry cluster consists of 8,000 highly skilled professionals in Ireland who are part of a broader ICT sector. The cluster generates over €9 billion in expert revenue annually while typically committing 15% of its revenue to R&D.

MIDAS today has over 60 member organisations from across the island, including multinational companies such as Analog Devices, Intel, Xilinx, Qualcomm, Cypress Semiconductor and ARM, along with indigenous enterprises such as S3, Decawave, CW Engineering, and Firecomms Technologies. The membership includes third-level institutes such as Institute of Technology Carlow, UCC, UCD, TCD and QUB.