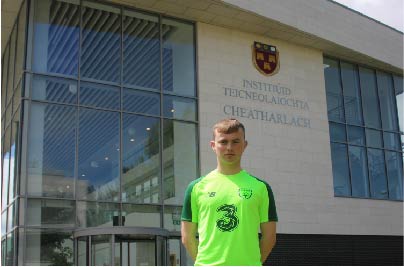 An IT Carlow student is getting ready to fly the flag for Ireland after being selected for the Irish squad in the Men’s European Soccer Championships for Deaf and Hearing Impaired.

Jack Malone, a first-year Business Student from Raheendoran in Carlow, will this week jet out to Heraklion, on the Green island of Crete for the tournament, which kicks off on 2nd June.

A keen sportsman, Jack plays soccer for Vale Wanderers in Leighlinbridge and Gaelic football for Ballinabranna. He was brought to the attention of the Irish squad team manager, who invited Jack to a trial in January. He was selected for the team in February and has been travelling to Dublin to train with the Irish squad regularly since then.

“All the staff and students at Institute of Technology Carlow are so delighted and proud of Jack’s achievements. He has worked hard to combine study and football training in preparation for this tournament and to be chosen to represent his country at this level is a credit to his skills and determination. Well done and best of luck Jack!“, commented Aisling McHugh, Access Officer, Institute of Technology Carlow.