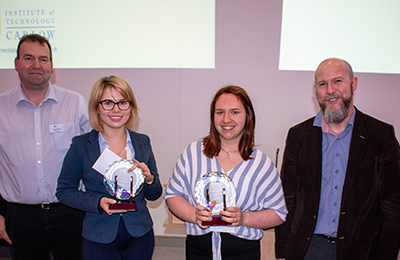 A team from Institute of Technology Carlow won the recent Eurachem Analytical Measurement Competition (EAMC) that was recently hosted by the Dept. of Science & Health.

It is timely that the Institute would produce the winning team, having first initiated the competition 20 years ago. A total of 26 teams from 14 academic institutions took part in this year’s competition with hosts Institute of Technology Carlow enjoying success as Zsanett Antal and Valerija Goga emerged as the winning team. IT Carlow was also represented by Gemma Dempsey and Aleksi Pylkkänen.


Eurachem is an association of Professional European Analysts with close links to bodies charged with promoting excellence and reliability in analytical measurement worldwide. EAMC is designed to raise awareness among student analysts of uncertainty in measurement and the requirement for excellence in analytical skills. The competition is open to teams of two full-time third-level registered students studying laboratory sciences in Irish universities or institutes of technology who have not yet entered the third year of their course. Competitors are selected by their institution based on their practical laboratory skills.

Joint runners up in the competition were Cristine Gonzaga and Wiktoria Babiarska from Institute of Technology Sligo, and Osatohanmwen Idelegbagbon and Udochukwu Isiadinso from Dublin City University.

The judges for the competition were Tom Hannigan from Forensic Science Ireland and Shonagh Masterson from the State Laboratory.

This annual event is organised in conjunction with Eurachem Ireland, and hosted by an Irish academic institution.

Based at the State Laboratory, Eurachem Ireland comprises members from state bodies, industry and education, and conducts workshops and seminars for analysts, educators and managers on topics such as validation, measurement uncertainty and traceability.