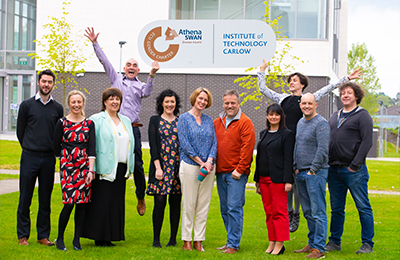 Institute of Technology Carlow is delighted to announce that it has been awarded the international Athena SWAN Bronze Award by AdvanceHE in recognition of our work in advancing gender equality in academia, and in promoting diversity and inclusion for staff and students in higher education.

“This is a highly significant achievement, placing the Institute amongst the first in the Technological Sector to achieve this award, and amongst the first in the higher education sector to achieve the award under the expanded Athena SWAN Charter.  Achieving this award under the expanded charter is particularly noteworthy as it recognises a commitment across the Institute to addressing gender equality challenges in higher education more broadly, including, but not limited to, those experienced by women.”

“This achievement is founded first and foremost on our Equality, Diversity and Inclusion (EDI) Policy which sets out our commitment to the principles and promotion of equality, diversity and inclusion in all aspects of institutional activity. This is not about political correctness, but is grounded in our belief that EDI is the key to growth and prosperity, from both an educational and societal perspective,” said Dr Mulcahy. “This award has come at an important time in our development as we progress our plans towards the establishment of the Technological University of South East Ireland. I extend my thanks and congratulations to everyone who has contributed to the achievement of this award, with particular thanks extended to the leadership provided by Dr Allison Kenneally, Director for the Office of EDI, our cross-Institutional Self-Assessment Team (SAT) and our EDI Steering Group.”

Important elements of successful institutional Athena SWAN applications have been documented by AdvanceHE and include, inter alia, strong evidenced-based institutional self-evaluations, broad and inclusive consultation, and smart action plans with measurable targets and baselines. This resulted in an Institute-specific gender equality action plan with 68 actions, many of which are already being progressed across the Institute.