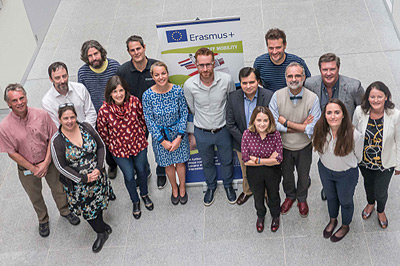 Institute of Technology Carlow is to lead a novel research programme, launched today, that will combine health science and technology to help teenagers diagnosed with Coeliac disease learn about and manage their condition independently.  The project is funded by the Erasmus+ Programme of the European Union in which an international team of health and technical experts and students share innovative practices and experiences.

Dr Alfonso Herrera, pediatrician in St Luke’s Hospital, one of the project partners stated that “Just one-in-three teenagers with Coeliac disease comply with a gluten-free diet, putting them at risk of developing long-term health problems”. Central to the research project announced today is the development of a mobile system which is led by gameCORE, the Institute’s ICT research centre, directed by Dr Daire O’Broin, that will allow teenagers monitor their own gluten intake and self-manage their condition.

The project will be the first of its kind to use a mobile system in Coeliac disease to monitor and educate the end user.

Coeliac disease is an auto-immune disease causing sufferers to react to gluten, the protein found in wheat, barley and rye, leading to damage of the small intestine and various symptoms and complications, if untreated. Coeliac disease is still relatively unknown, despite its high prevalence in people from Ireland and of Irish heritage. According to the Coeliac Society of Ireland, Coeliac disease is a significantly under-diagnosed disease – for each person diagnosed there are likely to be 5-10 people who remain undiagnosed. Screening studies have shown the prevalence to be around 1 in 100 in Ireland, giving an actual estimated total of near to 45,000. This under-diagnosis has led to this disease being known as ‘the silent disease’.

The project was launched this morning at Institute of Technology Carlow with all the partners in attendance. Speaking at the launch, Dr. Clare Lodge, healthCORE Director, one of the project leaders commented, “This is an exciting opportunity for Coeliac sufferers as we are striving to provide a way for them to self-manage their condition, something that up to now has not been possible”.