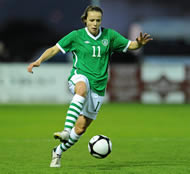 The 21 year old forward has signed a professional contract with the ‘Belles’ and is eagerly awaiting the start of the inaugural Womens Super League season in April.

“It's great to have the opportunity to play for a club with so much history and I'm really looking forward to the challenge of training and playing in a full time professional set –up. The manager has assembled a strong squad with numerous Internationals so I think we can have a successful season,” said O’Gorman, who comes from Wicklow.

In signing for the Belles, Aine has become the first participant from the BA Sport and Exercise (Soccer) course in IT Carlow to earn a professional contract with an overseas club. The course is a joint venture between IT Carlow and the FAI. O Gorman was one of 24 students to receive a place on the course when it was launched in September 2009.

Course Co-ordinator Paul O Reilly said: “It is a great achievement for Aine earning a contract with a professional club in the Women’s Super league. She has shown great commitment and worked extremely hard at improving as a player while she has been with us in IT Carlow and indeed for a number of years with the International team and with her club. We are very confident she will be a success with Doncaster and wish her all the best”.

Belles manager John Buckley said: “We are delighted that we have been able to attract Aine to the club. She will prove to be an excellent addition to the squad. Aine is hungry to do well, wants to score goals and will certainly be a handful for any defender to deal with in the Super League. It says a lot that she’s won 38 caps for her country and she’s just 21”