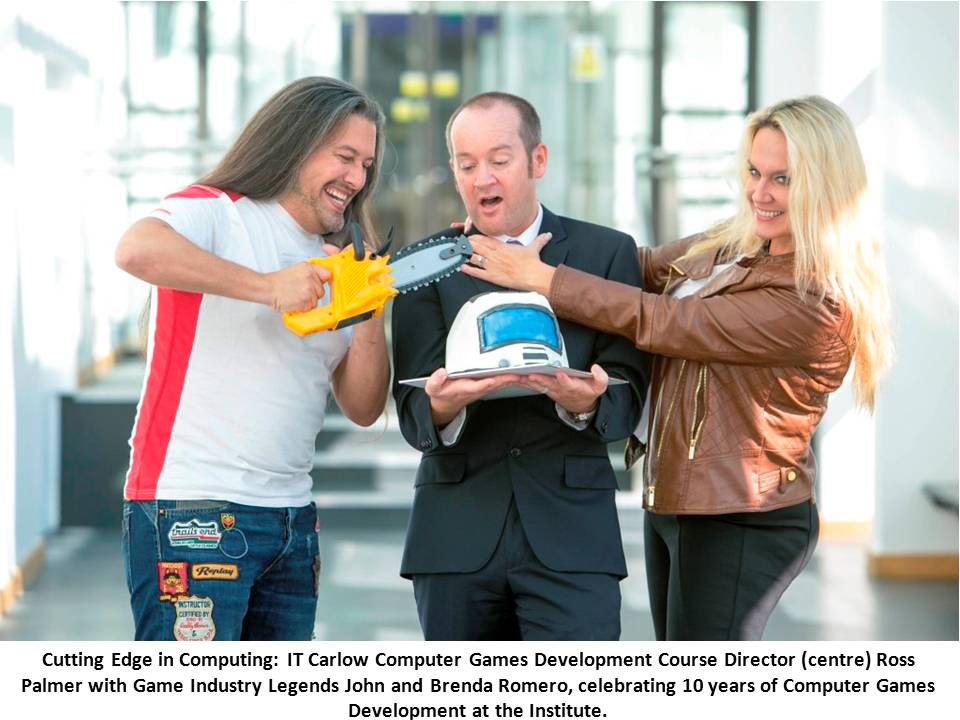 Game industry legends John and Brenda Romero are in Ireland to meet with game industry developers, educators, and students. The Romeros are currently visiting the Institute of Technology Carlow and speaking to students who form the tenth intake for the computer games development degree class, which was the first of its kind in Ireland when launched at IT Carlow in 2004.

Games that Mr. Romero designed and programmed such as Doom and Wolfenstein 3D are credited with defining the biggest-selling game genre, generating billions of dollars in sales each year. Since the early nineties First Person Shooters have been referred to as ‘Doom clones’ such is the influence the title and its creators had on gamers worldwide.

During his commencement address to students of games development at Institute of Technology Carlow, Course Director Ross Palmer said “you’re the future of this industry. Our alumni have worked on multi-million dollar titles that have been played by millions of gamers. This is the influence of games as a medium”. Mr. Palmer went on to say “IT Carlow was the first third level Institute in Ireland to offer Honours Degrees in Games Development and Software Engineering and since we first began accepting students a decade ago, we have continued to evolve and develop Ireland’s flagship games development course. Our graduates not only work in industry but also within IT Carlow’s GameCORE Research Centre. In 2004 the Irish games industry employed just over a 100 people and is now expected to employ in excess of 5,000 by the end of this year.”

Mr Nigel White, Head of Department of Computing at Institute of Technology Carlow welcomed Brenda Romero game designer and author of the book 'Breaking into the Game Industry: Advice for a Successful Career from Those Who Have Done It'. Brenda was awarded a Fulbright Fellowship to work with the Irish Games Industry. Introducing Brenda Romero to address students, Nigel White said “this is an important opportunity for the games industry in Ireland as we review where we’ve come from and plan towards our future. Institute of Technology Carlow expect to be the first institution in Ireland to offer the opportunity for game developers and digital game artists to study and work side by side. We’re delighted that Brenda and John Romero could join us to celebrate this important milestone as Institute of Technology Carlow celebrates a decade of educating game developers and appreciate their guidance as we continue to develop and evolve courses to serve specialist industries such as digital games. We very much look forward to potentially welcoming digital game artists to IT Carlow in 2015”.

During her public lecture, game industry veteran and Program Director of the Master’s Program in Games & Playable Media at the University of California Santa Cruz, Brenda Romero enlightened attendees on what it takes to be successful within the game industry. She went on to detail the elements of a great portfolio, how to make contacts, and how to succeed during a job interview. Institute of Technology Carlow students gave Brenda Romero a standing ovation as they embarked on their journey to become the developers who define the next decade of video games.