Robbie Keane Commences UEFA B licence at IT Carlow 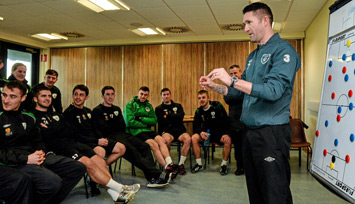 “It was an honour to have Robbie Keane in IT Carlow and it was a pleasure to assist him starting on his journey into coaching and managing by starting the UEFA B licence alongside the current 3rd years on the BA Sport and Exercise (Soccer) course. It was a great experience for all involved, Robbie was very helpful and spent lots of time with our students discussing his experiences in the game and also chatting about the upcoming UEFA B assessments. Robbie is an Irish legend – he is the current senior team captain with 131 caps and 62 goals and he still has a few years left to play, so having a player with his experience and knowledge in IT Carlow was fantastic and it is also a reward for the college's investment and commitment to sport that national stars like Robbie see it as the ideal venue to start the journey into coaching and managing. We wish Robbie all the best with his UEFA B assessments and also in the season ahead with LA Galaxy and Ireland’’, said Paul O’Reilly, BA Sport & Exercise (Soccer) Course Manager.