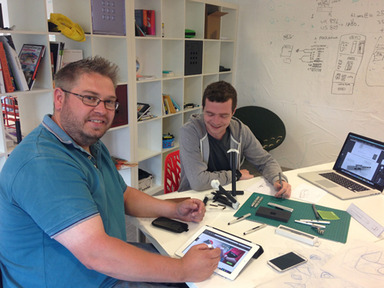 Noel Joyce, the 2009 Irish winner of the James Dyson Award for his hydraulic wheelchair brake invention, has his sights set on making his first €1m, just four years after graduating from Institute of Technology (IT) Carlow. He has developed a new type of touchscreen pen for devices such as iPads and Android tablets. Joyce already counts NASA as one of his customers for the Maglus innovation.

Joyce made the global headlines back in 2009 when he made the final 15 in the global James Dyson award that year for his hydraulic brake invention for wheelchairs.

Since then the IT Carlow graduate has been working away on new inventions. And he has just launched his first commercial product on the international market – the Maglus pen for touchscreen devices.

While still an undergraduate in Carlow, Joyce set up a collaborative called Designhub – it is based in Tullamore, Co Offaly. Together with a team of innovators, Joyce's aim was to try come up with the next big thing to disrupt sectors such as consumer tech.

"As a company, we strive to actively promote design as a problem-solving activity, creating jobs for designers and generating savings for companies," he said.

The magnetic stylus, originally designed for use on the Apple iPad, was borne of a frustration with existing touchpad pens, he said today.

Joyce and his colleagues at Designhub were frustrated with the inability of existing stylus pens to be conductive. They wanted a stylus that worked like a pen or pencil on paper.

Joyce and fellow designer Andy Shaw found four major problems with existing products. Firstly, they said there was a delay in connectivity, which meant that the response rate was low between pen and screen.

To solve the problem, they chose aircraft grade aluminium, a highly conductive material, to form the body of the Maglus.

They used anodising to maximise connectivity and eliminate the slow response rate. The Maglus replicates the experience of a pen or pencil when writing and drawing, claims Joyce.

The next problem the Designhub team identified with many existing models was the tip of the stylus, which was too small or too light, resulting in users having to push down on the screen.

To remove this problem they designed a heavier pen.

Joyce said he also found many stylus models were "throw-away" products, as they were easily lost or misplaced and also tended to wear down easily.

Frustrated by this, he worked with his team to encase two neodymium magnets in the body of the pen so the Maglus would attach to the touchpad.

They designed the tip to be replaceable, inserting three separate metal components and using silicon, which is also highly conductive.

The replaceable tip feature, he said, enables the team at Designhub to use different types of materials. This means that, as technology changes, they can change the tip.

"This ensures that users still have a highly connective pen but can change the tip as advanced versions are developed," he said.

According to Joyce, he went about carefully designing a product that is heavier and highly connective and complements the touchscreen devices on the market.

The design process involved over 100 iterations to create the most effective and efficient stylus, he said.

NASA space agency is among his most famous Maglus customers.  The touchscreen pen is also the stylus of choice for the creators of the Garfield cartoons - illustration company Paws Inc.

Joyce is currently working on other inventions, including the latest iteration of his 2009 hydraulic wheelchair braking system.

He said it has been a whirlwind journey since winning the Irish James Dyson award in that year (2009) for his wheelchair device.

"Winning the James Dyson Award brought my designs to prominence and attracted the attention of investors," he said. "I am an avid believer in the James Dyson philosophy – 'design something that solves a problem'."

He is also urging other young designers to enter the 2013 James Dyson Award before the 1 August closing date. There are prizes to the tune of €35,000 up for grabs in the global award.

Projects will be evaluated by judges around the world, as well as Dyson design engineers, before James Dyson announces the international winner on 7 November.